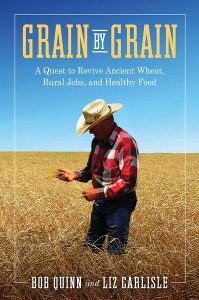 Bob Quinn is an organic farming pioneer, and a very successful one. He is a fourth generation Montana farmer who earned a Ph.D. in plant biochemistry. Quinn introduced Kamut ancient wheat to the United States in the 1980s, and today Kamut is grown on more than 70,000 acres worldwide. Quinn’s company, Kamut International, is a multi-million dollar business. He served on the first National Organic Standards Board, and has been honored with The Organic Trade Association Organic Leadership Award and Rodale Institute’s Organic Pioneer Award, among other awards.

Quinn describes his journey as an organic farmer in his book, Grain by Grain: A Quest to Revive Ancient Wheat, Rural Jobs, and Healthy Food, written with Liz Carlisle, author of the award-winning book, Lentil Underground.

Grain by Grain is no scholarly tome on potential benefits of organic; it presents a clear vision of what organic agriculture can and is accomplishing. Quinn writes based on his on-the-ground and long-time experience farming organically. In clear, simple, and compelling prose, he presents a commonsense assertion that organic farming is a viable solution to many of the pressing problems facing the world today, including poor food quality, pollution, and climate change. Bob Quinn is no environmental activist; he is a farmer, and his farm demonstrates the effectiveness of organic farming. In reading Grain by Grain, it’s obvious this man knows what he is talking about.

Quinn describes his background growing up on a conventional wheat and cattle farm and ranch in Montana. He planned to pursue a career in agriculture. But during his time as a Ph.D. student at the University of California-Davis, Quinn began to question the “science” of conventional agriculture with its reliance on toxic chemical fertilizers and pesticides.

He returned to Montana after receiving his degree in the late 1970s, and saw his hometown, Big Sandy, dying as a result of the economics of industrial agriculture.

As a scientist, he experimented with organic methods and saw their effectiveness in producing healthy foods and soils without agricultural chemicals. He eventually transitioned his farm, and it became one of Montana’s first certified organic farms in the early 1990s.

Grain by Grain presents a scathing indictment of the “status quo” of industrial agriculture. Quinn writes: “I’ll say this bluntly: Monsanto has lied to us. They’ve told us their chemicals are safe, and they’re not.” He describes how agricultural chemicals are destroying soils, polluting waterways, and increasing greenhouse gas emissions that contribute to climate change under the pretense of “feeding the world.” He exposes the hype behind genetically engineered crops, showing that the vast majority of them are engineered for resistance to Monsanto’s glyphosate herbicide.

Big Ag proponents say there are no health benefits with organic foods, and Quinn debunks that claim. Research on Kamut found that it lowered cholesterol, oxidative stress, inflammation, and blood glucose, a predictor of cardiovascular mortality.

Grain by Grain ends on a positive note that “everyone can be part of this solution” towards creating a healthier and more sustainable food system for people and the planet.