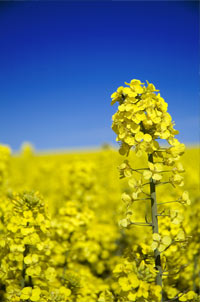 Following a lawsuit filed by farmers and seed companies, a State of Oregon’s court of appeals recently ordered an immediate halt to plantings of genetically modified canola in the Willamette Valley pending further judicial review.

Frank Morton, owner of Wild Garden Seed and one of the plaintiffs in the lawsuit, was happy with the appeals court ruling. “I was pleased to see how different sectors of Oregon’s agriculture and consumers of Oregon agriculture worked together to make this injunction possible. We had a powerful argument that included agronomy, economics, and good economic sense.”

“This thing got railroaded through”

The legal actions were a response to a series of actions by ODA to introduce canola into the Willamette Valley for production of biodiesel.

On August 10th, ODA announced its temporary rule, effective immediately, opening formerly protected, canola-prohibited zones in the Willamette Valley. The agency also initiated a permanent rule process, but only while planting already begins. ODA filed the rule to allow canola farmers to plant by September 1, without allowing public comment or a hearing, despite the potential for devastating harm to existing Willamette Valley industries from the new plantings. Oregon has prohibited the introduction of canola since 2009 because of numerous adverse impacts to existing seed production: GMO contamination, the creation of resistant weed species, and the proliferation of disease and pests.

According to Morton, the 2009 rule contained a clause requiring ODA to review the canola prohibition at the end of 2012. Instead the agency—in closed doors meetings—began reviewing the rule in March of 2012 following lobbying by representatives of the biofuels industry who want to process canola into biodiesel. The Willamette Valley Specialty Seed Association objected to the proposed rule change but it didn’t matter to ODA, Morton says. “Their attitude was ‘we don’t care if you don’t like it we are going to do it anyway.’ This thing got railroaded through.”

The Willamette Valley is known as a center of seed production, and specialty seed companies have created a lucrative $34 million industry for Oregon. Seeds for specialty crops such as the brassica family, which includes cabbages, broccoli, cauliflower, kale, turnips, and mustard seed are grown here, along with onions, spinach, beets, chicories, endives, chard, and many flowers.

Canola cross-pollinates with brassicas, and also naturalizes as a weed, increasing the chance that canola and canola pollen will become a permanent presence. GM canola has already been documented to be an herbicide-resistant “superweed” in North Dakota and California.

The strong potential for GMO cross-contamination of crops will critically harm the overall marketability and reputation of Oregon’s specialty seed industry.

“A number of our domestic and international seed purchasers have already made statements that they will no longer purchase Oregon seeds if more canola comes to the Willamette Valley,” said Nick Tichinin, owner of Universal Seed. “ODA’s shortsighted decision to expand the canola area will have long lasting economic impacts on a sector of agriculture that has been deeply rooted in Oregon for generations and on all of the families that own those businesses.”

“Could mean disaster for Oregon’s seed and organic industries”

As a result of the threat posed by canola contamination, the lawsuit was filed to stop plantings of the crop.

“We had no other option than to go to the courts,” said Leah Rodgers, field director for FoFF. “We have tried to work with the Kitzhaber administration to slow down this process and engage all stakeholders in public notice and comment, but ODA steamrolled producers and have rushed to open 1.7 million acres in the Willamette Valley to canola, a low-value crop with a huge, adverse impact on several high-value industries. This could mean disaster for Oregon’s seed and organic industries.”

In addition to the lawsuit, a petition containing more than 10,000 signatures from Oregonians opposed to GM canola plantings was delivered to Oregon Governor John Kizhaber and ODA Director Katy Coba.

An editorial in the Eugene Register-Guard also opposed ODA’s plans. “The Oregon Department of Agriculture should suspend its rule, recognizing the threat to a thriving sector of the state’s agricultural economy.”