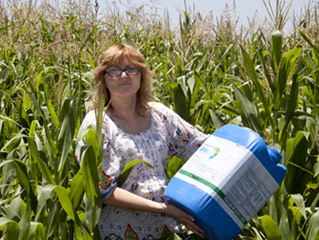 A mother whose infant died as a result of pesticide poisoning, Sofía Gatica is organizing local women to stop indiscriminate spraying of toxic agrochemicals in neighboring soy fields. Gatica was recently awarded the Goldman Environmental Prize in recognition of her courageous and successful efforts.

In 1999, Sofia Gatica gave birth to a daughter, but three days later the baby’s kidneys failed. The working-class mother of three was determined to find out what killed her child. She began talking to her neighbors in Ituzaingó, a working-class neighborhood of 6,000 in central Argentina surrounded by soy fields, and became alarmed at the prevalence of unexplained health problems plaguing her community.

Argentina is the world’s third largest exporter of soybeans. Every year, the industry spreads over 50 million gallons of pesticides—namely glyphosate, the key ingredient in Monsanto’s widely-used herbicide Roundup, and endosulfan—through aerial spraying over farmland.

Both pesticides are highly toxic despite Monsanto’s claim that glyphosate poses no risks to humans. A 2008 scientific study found that even at low concentrations, glyphosate causes the death of human cells. Endosulfan has been banned in 80 countries because of its threats to human health and the environment.

Gatica discussed the pesticide problems with her neighbors and co-founded the Mothers of Ituzaingó—a group of 16 mothers working together to put a stop to the indiscriminate agrochemical use that was poisoning their community.

Gatica and her group began going door to door to conduct the first epidemiological study of the area. They found that Ituzaingó residents reported cancer rates that were 41 times the national average, as well as high rates of neurological and respiratory diseases, birth defects, and infant mortality.

With the findings confirming their worst fears, the Mothers of Ituzaingó launched a “Stop Spraying” campaign with environmental groups in Argentina. They held press conferences, demonstrations, and published materials to warn the public about the dangers of pesticides. Gatica also met with research institutions to request scientific studies to confirm what she had observed in Ituzaingó.

Gatica and the Mothers of Ituzaingó faced an uphill battle, having very few resources or any direct access to demand accountability from Monsanto, DuPont, and other global agrochemical companies operating in Argentina. They also endured insults and threats from individuals, police officers, and local business owners in Ituzaingó. In 2007, an individual entered Gatica’s house and demanded that she give up the campaign while pointing a revolver at her.

Despite these challenges, Gatica and the mothers’ advocacy has had resounding effects. In 2008, the president of Argentina ordered the minister of health to investigate the impact of pesticide use in Ituzaingó and a resulting study conducted by the Department of Medicine at Buenos Aires University corroborated the mothers’ door-to-door research linking pesticide exposure to public health. Gatica subsequently succeeded in getting a municipal ordinance passed that prohibited aerial spraying in Ituzaingó at distances of less than 2,500 meters (8200 feet) from residences. A 2010 ruling from the Supreme Court not only banned agrochemical spraying near populated areas, but also reversed the burden of proof—instead of residents proving that spraying causes harm, the government and soy producers must now prove the chemicals are safe.

Other municipalities in Argentina have reached out to Gatica for help addressing similar problems in their neighborhoods. Recognizing the extent of the issue, Gatica is working with the Stop Spraying campaign to ban all aerial spraying in Argentina and create buffer zones so that agrochemicals are not used in close proximity to residential areas and waterways. With Argentina’s ban on endosulfan going into effect in July 2013, Gatica and her colleagues are pushing for a nationwide ban on glyphosate as well.

“As mothers we want to hold the government and the responsible companies accountable for the harm they do to our children,” Gatica says.