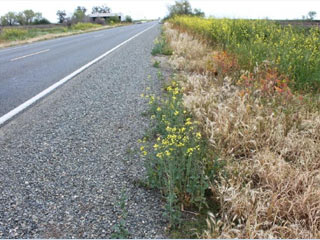 Genetically modified Roundup Ready canola is not widely grown in California, but it is growing widely as an herbicide-resistant weed.

A recent article in Western Farm Press described how GM canola escaped field trials in 2007 and farmers’ fields and spread to farms, roadsides, and highways.

The GM canola is genetically altered to withstand sprays of Monsanto’s Roundup herbicide. An estimated 90% of canola, grown mostly grown in the Midwestern United States and Canada, is Roundup Ready.

University of California Cooperative Extension farm advisors, Douglas Munier and Kent Brittan, conducted field trials of GM canola in 2007 in several California counties to study the potential of growing the crop to produce biofuels. But they found that yields were too low to be a viable crop in California. “It’s not a cost-effective crop to grow,” Brittan said.

The experiment ended but GM canola kept growing. In 2009, over 500 GM canola plants emerged on a one-tenth acre plot in Butte County where a field trial was grown in 2007. Munier also found it growing along a 100-mile stretch of highway from Chico to Davis, California, resulting from seed that had fallen from farm equipment transported to the 2007 field trials.

Canola produces a large amount of seed, some of which is dormant, but can grow into plants up to 10 years later.

The researchers also say that GM canola is a challenging weed for areas where glyphosate is used—roadsides, orchards, vineyards, fallow fields, and Roundup Ready crop fields—because glyphosate won’t kill it.

Brittain said one roadway was treated with a half gallon of Roundup, which killed other vegetation but the GM canola survived. (See photo above.)

“This is not just a weed, but one totally resistant to Roundup, an herbicide that is intensely used in a wide variety of high value crops in California,” Munier said.

Brittan also expressed concerns that seeds from GM canola growing on roadsides could spread into fields of organic rapeseed where the canola could cross-pollinate the rapeseed, which like canola is a member of the brassica plant family. While emphasizing that organic fields are not close to where GM canola is growing, Brittan said: “We are watching that closely; we don’t want that to become a problem.”

This isn’t the first time that GM canola has been found growing as a weed. In 2010, scientists found GM canola growing wild in many areas of North Dakota, in some cases far from farm fields.