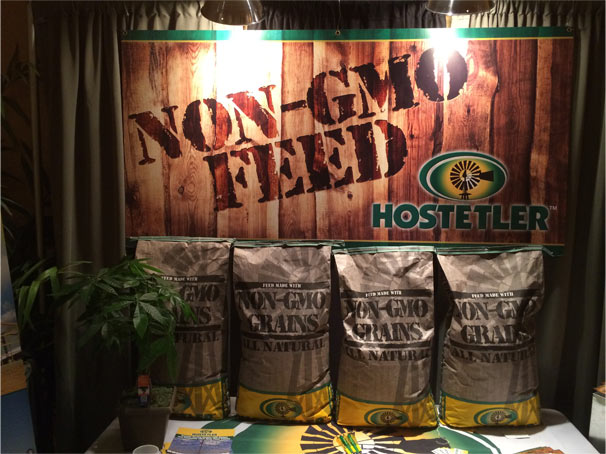 A growing number of meat, dairy, and egg suppliers are raising their animals on non-GMO feed

The market for non-GMO animal feed is seeing tremendous growth as consumer awareness of risks of genetically modified foods is pushing meat, dairy, and egg producers to sell products derived from non-GMO feed.

"Growing by leaps and bounds"

Non-GMO feed suppliers nationwide report strong growth. “The demand is incredible,” said John Yantis, owner and manager, Texas Natural Feeds in Austin, TX which sells poultry feed. “We have more than quadrupled our sales in the past three years.”

Nathan Shutt, owner, Liberty Feed and Bean in Shelbyville, IN, said his company’s growth charts are at a 45-degree angle. “Our business is growing by leaps and bounds every month.”

A growing number of consumers don’t want GMOs in meats. “Consumer awareness about GMOs has risen to a higher level and that drives the demand for non-GMO products,” Yantis said.

Aaron Gerber, director of business development at Ohio-based non-GMO feed supplier Hiland Naturals, agrees. “Consumers are becoming more and more concerned about the quality of their food and how it is raised.”

Hiland Naturals has mills in Pennsylvania and Arkansas and will add another in Ohio this year.

Many non-GMO feed suppliers report better animal health with non-GMO feed. “I get comments from people who switched from GMO feed to our feed, and they say how healthier their chickens are,” Yantis said.

Non-GMO feeds include corn- and soy-based products, grains such as milo, oats, wheat, and barley, and products with multiple ingredients.

Poultry is the biggest driver of non-GMO feed. A growing number of people in the US are raising chickens in their backyards, and many want non-GMO feed.

“It’s the eggs and (chicken) meat (driving demand). The demand is not close to being met,” Shutt said. We’ve had people looking for non-GMO feed for a year.”

After chickens, demand is strongest for hogs and dairy and beef cows.

Yantis even sold one customer eight tons of non-GMO corn to feed deer. “No one would have cared about this a few years ago,” he said.

Non-GMO feed suppliers report adequate supplies of raw materials. “We see a decent balance of non-GMO crop growth and livestock feed demand, but we must keep those two sectors balanced or we could see a large market interruption,” said James Frantzen, owner of Riverside Feeds, LLC in Iowa.

The fact that more farmers are interested in growing non-GMO corn and soybeans is helping the supply. “More farmers are refusing to pay for the Monsanto tech fees, and more supply is becoming available,” Frantzen added.

“More and more farmers are seeing the need for non-GMO and seeing they can get a premium for going that route,” said Swartzentruber.

Vlieger said farmers are recognizing better animal health with non-GMO feed and by getting rid of glyphosate residue in feedstuffs.

Vandemark sees cost challenges with the verification. “We get small batches of non-GMO corn and soybeans, and I will have to pay $300 (for PCR testing) to test small amounts. That’s a hugely limiting factor.”

Non-GMO feed suppliers face other challenges such as logistics. “Too many animals are fed in parts of the country where non-GMO grain is not located,” Vlieger said, though he said efforts are underway to address this.

While consumers are becoming aware of GMO risks, more education is still needed. “The biggest hurdle is still educating people on what GM foods are doing to our environment and health,” Yantis said. “The more people who are educated the more it will turn.”